Your God Spot: The starting point for energy healing 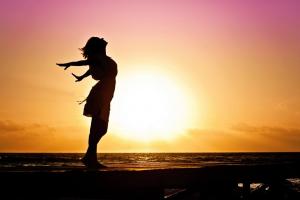 My student was more than excited to report back to the class. The week before, I had taught a simple technique during my energy healing training program. She had reason to use it right away.

She told the story.

Her son, a preciously precocious five-year-old, had decided to cut his finger. He wanted to see what his blood looked like. Was it red, like in the picture books?

He cut himself to the bone.

I had just taught my class about the “God’s Spot”.

I know it is not politically correct (pc) to use the word “God” in energy medicine. (!) But there is a specific reason that the label is spot on for what you personally call Oneness.

I’ve been teaching about the God Spot for many years, but for some reason this group picked up the idea and drove with it. As I explained to you, the God Spot is a unique space in the center of the chest. Herein lies our own indwelling spirit, God’s spirit, and another very special ingredient.

A cell from the body of God.

This physical realm is notable in various esoteric traditions. The God Spot is near the Tan Zhong or Acupuncture Point for Heart Health in Traditional Chinese Medicine. In TCM, working on this acupuncture point relieves fear and anxiety. Many Native American communities ask participants to speak from the heart during the ceremony.

The God Spot is also located exactly in the middle of the heart chakra, the subtle energy center that connects all other chakras. This chakra houses the physical heart, which emits more electrical, magnetic and electromagnetic energy than the brain. The heart not only creates a field that is stronger than any other organ, it also connects us to others. And when there is meditation on spiritual properties in this area, healing effects appear throughout the body.

For all of this, the God Spot gives even more power to the energy healing that is carried out through this area of ​​the body. The reason?

Since it is proposed to contain a physical cell of God, interactions through that location represent love that is manifested in material reality. Right down to your cells, DNA, and subatomic wave particles.

This concept changed the life of the student I introduced earlier.

As she watched her son’s finger splatter blood, she focused on her own god point. She mentally decided that her son’s incision needed to be closed. It did.

He was very angry. In fact, he was so upset that he parted the wound with his fingers. His mother closed it again. It stayed closed.

Since that interaction, other students working with this concept have reported that their chronic conditions have improved. Many began to feel happier and healthier. [Their] own customers responded. The simple and only key seems to be willingness to operate through the God Spot.

I think it’s important to call this place the “God” spot because it’s not a pc these days to use the word “God”. The label “God” – compared to universe, unity, Christ Consciousness, Higher Power and the like – bestows the image of God most commonly used in the biblical religions. The picture shows a Caucasian man with a long beard who is seated on a throne.

In whatever way this image triggers us, the idea of ​​a human-like God works for us rather than against us as we seek healing at all levels of our being, especially the physical. While terms like “oneness” are nice, when we want concrete changes, our subconscious will respond more heartily to the idea of ​​a God with a BODY than to a universe that is spirit. (!) When one of God’s cells resides within us, it can deliver healing energies to any part of our material selves.(!)

The Most Powerful Energy is Invisible

My experience as an intuitive energy healer is that it is terribly difficult to transform the physical body. Everything is made up of energy, as Albert Einstein discovered decades ago, but very little is made up of physical or measurable energy. In fact, the physical energy of an object is much less than 1 percent. The rest is subtle energy, which is often equated with quantum wave particles.

Most people in the energy medicine field know that physical or mental illnesses, including cancer, heart disease, chronic pain, autoimmune diseases, anxiety, depression, and more, are greatly influenced – if not caused – greatly by subtle energies. But it is often not enough to simply move subtle energies, such as by feeling feelings and changing beliefs, to significantly affect physical reality.

The idea of ​​a direct connection – a unique one at that – enables the transformation to land. Physically.

When we are actually connected in a unified field, which is what quantum physics suggests, it is not difficult to actively consider that some aspect of this totality lies within us. Why shouldn’t the Greater Consciousness take hold in our smaller ones as well?

What my students may have experienced is an extension of the placebo effect, which has shown itself to be incredibly powerful. Basically, studies show that what you believe tends to happen. Is it that bad?

Operation in your own God Spot is very easy. Just focus on the space under your sternum in the center of your chest. Now consider this area as your spirit, the Divine Spirit and above all as a cell of God. Everything material is possible through this physical connection. The power of love can be transmitted directly into your own and the physical reality of others. Now just meditate on this connection and follow any intuitive guidance you receive. Herein lies the power of grace or love that makes a difference.

(Emphasis (!) added by Rev. Niamo) What do you think? Please offer comments below.