GREENVIILLE, SC (WSPA) – The Urban League of the Upstate and the Neighborhood & Historic Preservation Advocates are working to preserve Greenville’s Black history.

Greenville City Council gave initial approval to transfer ownership of the land where the McClaren Medical Shelter sits to the Urban League of the Upstate. Leaders said many people are connected to the space, due to its history in the Black community.

It’s a building many may remember in Greenville’s West End, near the Southernside community.

Dr Edward McClaren founded the clinic in 1949 and used it to treat Black patients during segregation.

“When I was a little girl, Dr. McClaren was my doctor, and I remember going to his office – me, my mom, my brother – for checkups when you were sick,” said Lillian Brock Flemming, Greenville City Council, Mayor Pro-Tem.

The Urban League of The Upstate sent 7NEWS information about McClaren.

The below information was provided to them by the Neighborhood & Historic Preservation Advocates:

“In Greenville South Carolina during post World War II, life was very much segregated and most
health facilities were for ‘white only,’ General Hospital had a small “open ward” for “non-white
patients” but denied Black doctors to practice. The Working Benevolent Hospital on Green Ave
what condemned. Dr EE McClaren provided his own finance and built a 1st class facility,” the presentation said. 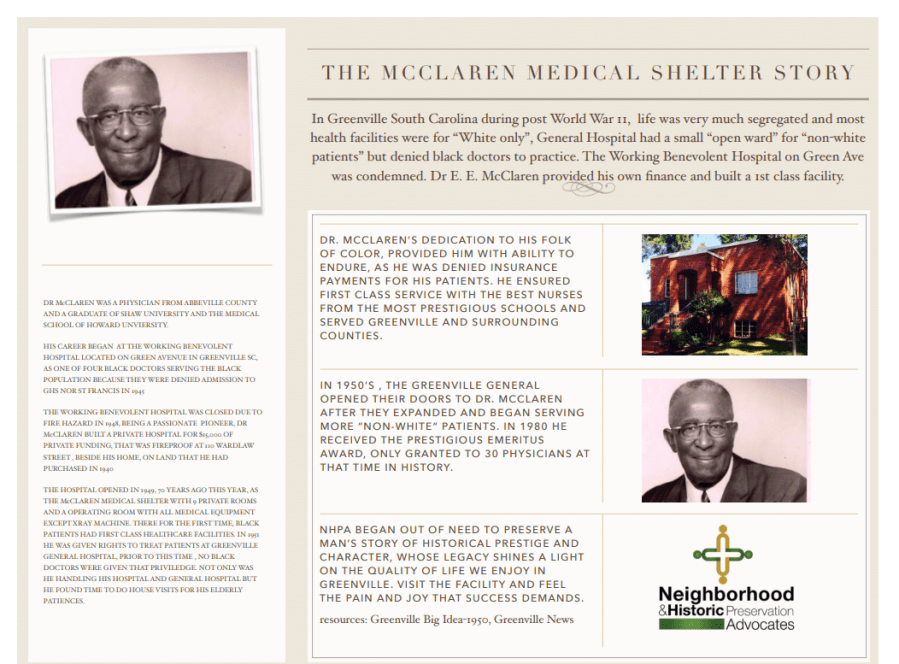 “It was a wonderful thing, because it wasn’t very far from my house. I lived in the Southernside, so walking there was not a very long way,” Flemming said. “So, it was exciting to even have a doctor–basically, you felt like in your community,” she said.

Flemming said the process of preserving the building started years ago.

“The conversations with doctor McClaren’s office building began about four years ago in 2018,” Flemming said. “We began the process of talking to the developer who was going to build next door and when he found out, he had just gotten information about the McClaren facility, and he was so impressed, and he said to me that he was very interested in trying to stabilize, as well as try to keep an historical facility for Blacks and others in the City of Greenville,” Flemming said.

Dr Gail Wilson Awan, the President and CEO of the Urban League of The Upstate, said the conversations started before she started in her role.

“It started, certainly, before I came. I’ve been here a year,” Wilson Awan said. “It started with the developer coming down to build the apartments…the luxury apartments that are there, and in that process, you know how they have the review boards,” she said. “It was pointed out that this brick building was some sort of…they weren’t sure…some sort of historic something,” Wilson Awan said.

“So, people started looking into it, and then a group formed, a group of advocates from the community,” she said. “When the developer bought the land, the McClaren Medical Shelter building was sitting where he needed to build the apartments on Academy and Wardlaw. So, he originally thought, I can just tear this down and build my apartments and that’s when he became…when he learned that it was this historic building,” she said.

Wilson Awan said the developer decided not to tear it down, and so it still remains.

“He agreed to have the building lifted up. This brick building lifted up, and moved to the corner closer to Academy Street, which was a small strip of property owned by the city,” Wilson Awan said. “So, they moved it to the city land,” she said.

While Wilson Awan said over the years, the building was used for other things, but now, The Urban League of The Upstate, is working to turn it into The McClaren Institute for Health and Quality of Life.

“We want to honor Dr. McClaren’s legacy, providing health access to those that are in most need. Now, we won’t be doing actual medical treatment ourselves, but we will be working with community partners, wellness and health professionals to get people information, services, like pop-up flu clinics, blood pressure readings into the community,” Wilson Awan said. “Also, we will be using it for career development, for workforce development, introducing our students and adults to careers,” she said.

They also want to use the space, to research policies in relation to health disparities in minority communities.

Wilson Awan said the bottom floor will be known a Black History Resource Center and visitor center highlighting the community.

“The bottom floor will be dedicated to attribute to the African American history here in Greenville, sharing that history. We will certainly be doing small group events there,” Wilson Awan said.

“It’s a connection to our past. It’s certainly a pathway just to honor the legacy about the importance of quality of health, quality of life, the quality of our health– and how we can all play a part in that,” Wilson Awan said.

It’s something Flemming said they support.

“We must always remember the history of the people who gave, and it wasn’t all people of one color,” Flemming said. “So, this is going to be very exciting, because of the contributions he made to the health and welfare for our community,” she said.

“He gave probably more than most, in order to help keep little children alive and well, and being able to go to school and graduate, and elderly people to be out of pain,” Flemming said. “It’s going to mean a whole lot,” Flemming added.

As for the official ownership, the City of Greenville said on its website, the second and final vote is scheduled for January.

Dr Wilson Awan said when it passes, she hopes to have some sort of ribbon cutting in the Summer, although it won’t be completely open.

She also said a filmmaker has decided his first feature film in the Greenville Upstate, will be the story of Dr. McClaren.

Casting for that project should begin sometime at the beginning of next year.