This article is part of State of Health, a series about how Michigan communities are rising to address health challenges. It is made possible with funding from the Michigan Health Endowment Fund.

An upcoming symposium in Kalamazoo will examine the many unique mental health challenges Black Americans face, including higher rates of emotional distress and lower access to behavioral health care.

“I’m really excited about our speakers because I believe that they address vast arrays of issues, from what we see as simple issues to more complicated issues,” Cunningham says. 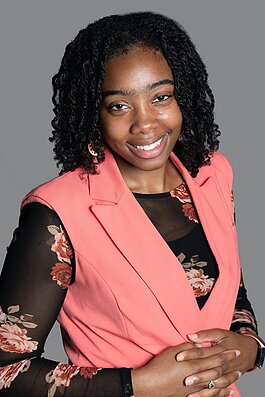 According to the US Department of Health and Human Services’ most recent published numbers in 2019, Black adults are more likely than white adults to report persistent symptoms of emotional distress — and those living in poverty are more than twice as likely to report serious psychological distress. Rates of suicide attempts among Black adults were higher than any other racial or ethnic group.

Despite these needs, only one in three Black adults with mental illness receives treatment. the American Psychiatric Association finds that they are also less likely to receive consistent care, less frequently included in research, and more likely to seek mental health help at the emergency room or from their primary care provider rather than from a mental health professional.

Cunningham says stigma is one of the major underlying challenges for Black people who struggle with mental illness.

“There’s a lot of shame,” Cunningham says. “There’s a lot of historical context that goes along with the shame and the guilt of getting mental health care. Often times in the Black community, it’s seen as a weakness or that they don’t have enough faith in God.”

One reason this stigma persists is a general lack of understanding of how mental illness impacts people on a daily basis. Systemic racism plays an equally devastating role when Black Americans seek to access mental health care.

“When they do decide to get help or seek providers, there is a lack of identified providers in their culture — the issue of ‘Can I find a provider that has my same cultural background?'” Cunningham says. “Often times, when Black people find a provider who is not [of] the same culture or Black or doesn’t have the cultural competency, there’s a lot of navigating language barriers at the same time that they’re trying to receive treatment.”

When mental health needs go unmet, quality of life for individuals, families, and whole communities plummets. Individuals with these unmet needs are not capable of dealing with the challenges of daily life, like succeeding in school, performing at work, maintaining a household, or adequately caring for children.

“When I think about the historical context of America, Black people, race, and racism, it really doesn’t allow Black people to excel in ways that they could,” Cunningham says.

She notes that there may be distinct racial disparities in how the rest of the world views an individual’s mental illness. Cunningham says Black people experiencing depression are often more likely to be perceived as “angry” or unpleasant than white people experiencing the same.

“The mental health portion is missed altogether,” she says. “We live in a society that misses the cues that mental illness is taking place in a Black person’s life. That prevents them from excelling in jobs, which prevents them from moving forward — and perhaps could be easily fixed with some medication or some counseling. ”

The upcoming symposium will address Black mental health from a variety of angles. One example is a presentation from psychotherapist Shoni Newhouse about how Black hair historically has been used as a weapon to demoralize the Black community and justify discriminatory practices. For example, Cunningham cites the story of a young Black wrestler who was forced to cut his dreadlocks before a wrestling match.

“It doesn’t seem like a big deal. But when you start to have a legislative situation and dehumanizing practices against Black hair, it becomes a big deal,” Cunningham says. “… When you have legislation and policies around Black hair, how we can wear it, what we can do with it, that is a big deal.”

Kalamazoo-based therapist Devin Willis will speak at the symposium about the “strong Black woman” stereotypes, which holds that Black women are naturally resilient to mental health and other challenges. Willis says the stereotype often comes into play when treating Black women.

“I’m being a lot more intentional about identifying those specific treatment modalities that center Black women’s culture and experiences,” she says. “I absolutely love being a Black woman and enjoy my culture. That’s one of the big things that I try to promote so that when we think of Black women, we’re not only thinking about the struggle.” 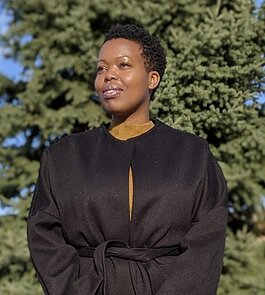 (pictured, Margaret Uwayo)
Other topics will include how social media impacts African-Americans’ mental health; the connection between ancient tribal customs and modern-day Black Americans; and challenges the Black community faces within the institution of marriage. Margaret Uwayo, senior director of behavioral health and academic success at YWCA Kalamazoo, will share her experience in treating Black children living on the autism spectrum. These children face a steeper climb than their white counterparts because they are routinely diagnosed much later.

“These children don’t get access to early intervention supports that they really need. And that continues to put them behind,” Uwayo says. “It keeps them at a disadvantage. If you have a problem but you don’t know the solution, you constantly have to go somewhere else to get help, but you’re not empowered. You don’t have this easy access to resources . It keeps the equity going.”

Uwayo believes that accessing mental health resources is especially difficult for Black Michiganders. In addition to facing stigma and bias, many Black residents experience income challenges. They may not be aware of existing resources, or resources may not be available where they live. Uwayo says that despite the vast number of mental health resources available in Michigan, the various systems entrusted with care — including schools, mental health providers, and social services — rarely communicate with each other, leaving the individual in need facing extreme difficulty or failure in navigating their own care.

“If we can take individual ownership, that’s what is going to be our call to action,” Cunningham says. “We ask every individual to make one commitment to a call to action. That can be something very simple like ‘I’m going to share with my neighbor about mental health’ or ‘I am going to be more aware of how I treat someone ‘ or ‘I’m going to ask questions before I make a judgment decision.’ Those are all calls to action, each person committing to one thing that they can do that will cause a community to change, one at a time, one by one.”

Estelle Slootmaker is a working writer focusing on journalism, book editing, communications, poetry, and children’s books. You can contact her at [email protected] or www.constellations.biz.

Valarie Cunningham photos by Fran Dwight. All other photos courtesy of the subjects.